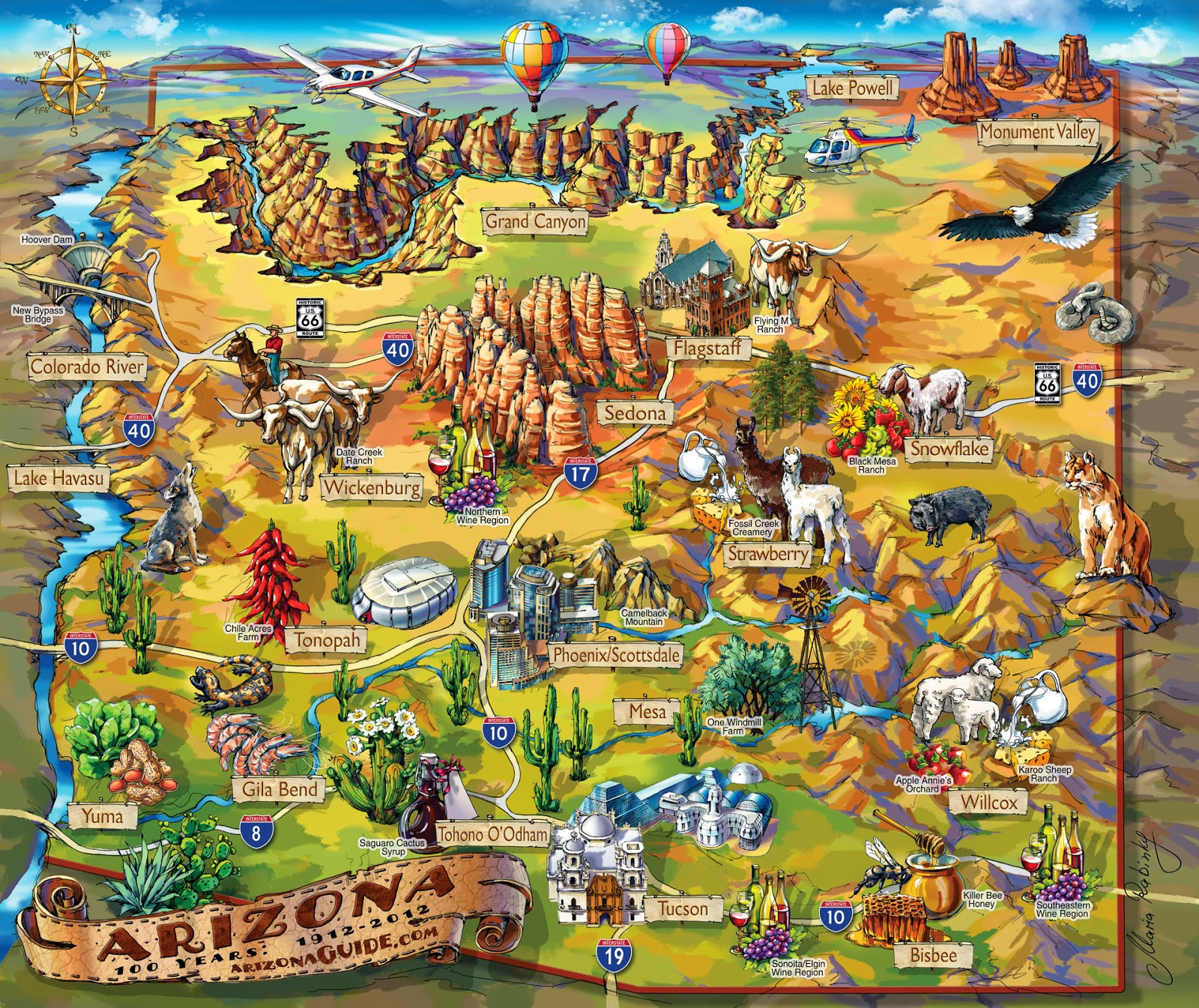 1. Arizona has 3,928 mountain peaks and summits, more mountains than any one of the other Mountain States (Colorado, Idaho, Montana, Nevada, New Mexico, Utah, and Wyoming).


2. All New England, plus the state of Pennsylvania would fit inside Arizona.


7. Arizona has the largest contiguous stand of Ponderosa pines in the world stretching from near Flagstaff along the Mogollon Rim to the White Mountains region.


10. Out of all the states in the U.S., Arizona has the largest percentage of its land designated as Indian lands.


11. The Five C's of Arizona's economy are: Cattle, Copper, Citrus, Cotton, and Climate.


12. More copper is mined in Arizona than all the other states combined, and the Morenci Mine is the largest copper producer in all of North America.


13. Clark Gable and Carole Lombard, two of the most prominent movie stars of Hollywood's Golden Age, were married on March 18, 1939, in Kingman, Arizona.


16. Bisbee, Arizona is known as the Queen of the Copper Mines because during its mining heyday it produced nearly 25 percent of the world's copper and was the largest city in the Southwest between Saint Louis and San Francisco.


18. Arizona grows enough cotton each year to make more than one pair of jeans for every person in the United States.


20. In 1912, President William Howard Taft was ready to make Arizona a state on February 12, but it was Lincoln's birthday. The next day, the 13th, was considered bad luck so they waited until the following day. That' how Arizona became known as the Valentine State.


21. When England's famous London Bridge was replaced in the 1960s, the original was purchased, dismantled, shipped stone by stone and reconstructed in Lake Havasu City, Arizona, where it still stands today.


22. Mount Lemmon, in the Santa Catalina Mountains, is the southernmost ski resort in the United States.


23. Rooster Cogburn Ostrich Ranch in Picacho, Arizona is the largest privately-owned ostrich ranch in the world outside South Africa.


24. If you cut down a protected species of cactus in Arizona, you could spend more than a year in prison.


25. The world's largest to-scale collection of miniature airplane models is housed at the library at Embry-Riddle Aeronautical University in Prescott, Arizona.


26. The only place in the country where mail is delivered by mule is the village of Supai, located at the bottom of the Grand Canyon.


27. Located on Arizona's western border, Parker Dam is the deepest dam in the world at 320 feet.


28. South Mountain Park/Preserve in Phoenix is the largest municipal park in the country.


30. Oraibi, a Hopi village located in Navajo County, Arizona, dates back to before A.D. 1200 and is reputed to be the oldest continuously inhabited community in America.


31. Built by Del Webb in 1960, Sun City, Arizona was the first 55-plus active adult retirement community in the country.


33. Many of the founders of San Francisco in 1776 were Spanish colonists from Tubac, Arizona.


34. Phoenix originated in 1866 as a hay camp to supply military post Camp McDowell.


35. Rainfall averages for Arizona range from less than three inches in the deserts to more than 30 inches per year in the mountains.


36. Rising to a height of 12,643 feet, Mount Humphreys north of Flagstaff is the state's highest mountain.


37. Roadrunners are not just in cartoons! In Arizona, you'll see them running up to 17-mph away from their enemies.


38. The Saguaro cactus is the largest cactus found in the U.S. It can grow as high as a five-story building and is native to the Sonoran Desert, which stretches across southern Arizona.


39. Sandra Day O'Connor, the first woman appointed to the U.S. Supreme Court, grew up on a large family ranch near Duncan, Arizona.


40. The best-preserved meteor crater in the world is located near Winslow, Arizona.


42. The Navajo Nation spans 27,000 square miles across the states of Utah, Arizona and New Mexico, but its capital is seated in Window Rock, Arizona.


43. The amount of copper utilized to make the copper dome atop Arizona's Capitol building is equivalent to the amount used in 4.8 million pennies.


44. Near Yuma, the Colorado River's elevation dips to 70 feet above sea level, making it the lowest point in the state.


45. The geographic center of Arizona is 55 miles southeast of Prescott near the community of Mayer.


46. You could pile four 1,300-foot skyscrapers on top of each other and they still would not reach the rim of the Grand Canyon.


48. The coldest temperature recorded in Arizona was 40 degrees below zero at Hawley Lake on January 7, 1971.

49. A saguaro cactus can store up to nine tons of water.

50. The state of Massachusetts could fit inside Maricopa County (9,922 sq. miles).

51. The westernmost battle of the Civil War was fought at Picacho Pass on April 15, 1862 near Picacho Peak in Pinal County

52. There are 11.2 million acres of National Forest in Arizona, and one-fourth of the state forested.


54. On June 6, 1936, the first barrel of tequila produced in the United States rolled off the production line in Nogales, Arizona.


55. The Sonoran Desert is the most biologically diverse desert in North America.


56. Bisbee is the Nation'southernmost mile-high city.


57. The two largest man-made lakes in the U.S. are Lake Mead and Lake Powell, both located in Arizona.


58. The longest remaining intact section of Route 66 can be found in Arizona and runs from Seligman to Topock, a total of 157 unbroken miles.


59. The 13 stripes on the Arizona flag represent the 13 original colonies of the United States.


62. Kartchner Caverns, near Benson, Arizona, is a massive limestone cave with 13,000 feet of passages, two rooms as long as football fields, and one of the world's longest soda straw stalactites: measuring 21 feet 3 inches.


63. You can carry a loaded firearm on your person, no permit required.

64. Arizona has one of the lowest crime rates in the U.S.A.

65. All legal property descriptions in "Township" and "Range" descriptions begin at the joining of the Salt River and the Gila River at 115th Avenue (Avondale Boulevard) and Baseline Road:  The 00:00 point.

Known as the "Salt River Baseline and Meridian" where a "zero point" surveyor's brass marker is located.

As you go further to the East, the North-South roads (example: Power Road in East Mesa) have a correction where the road on the North Side of Baseline Road is further to the East than on the South side of Baseline Road.  This effect is caused by the correction in diameter of the earth, since the diameter is smaller - the further you approach the North Pole.  Arizona is at the 33 Degree, 21 minute angle from the equator.

Hope you enjoyed all of the trivia...!

For Information Email Us